IGI Seminar Series: The Next Generation of CRISPR-Powered Transistors for Amplification-Free DNA Detection

Join us for an exciting talk on electrolyte-gated field-effect transistors (FETs) led by Kiana Aran, co-founder and Chief Scientific Officer at Cardea Bio. FETs have been widely employed in biomedicine due to the exceptionally high capacitance that allows for low applied voltages. The FET's sensing capability is primarily due to the formation of the electric double layer within the electrolyte semiconductor interface, allowing for stable operation in aqueous environments required to monitor biological processes. Within the ever-expanding field of electrolyte-gated FET biosensing, FETs fabricated from 2D materials, such as graphene, offer the ability for ultrasensitive detection. The 2D structure of graphene, which is a single atom thick, is primarily responsible for this ultra-sensitivity. Uniquely, due to the 2D structure of graphene, every atom in the graphene monolayer lattice structure is in direct contact with its environment. This maximized exposure to the surrounding environment is ideal for operating within the nanoscale, which is optimal for detecting biomolecular events with high sensitivity.

The Aran lab has employed CRISPR technology alongside graphene field-effect transistors (gFETs) for sensitive identification and detection of biomolecular events. This technology repurposed CRISPR enzymes, which are endogenously involved in adaptive immunity against nucleic acid invaders in bacterial and archaeal species, by combining them with gFETs to detect insertion and deletion mutations in clinical samples from patients with Duchenne muscular dystrophy without labels or amplification. In collaboration with Cardea Bio, UC Berkeley, Vilnius University, and CasZyme, her lab has recently expanded this technology to detect single nucleotide differences in unamplified genomic DNA samples from patients with sickle cell disease and Amyotrophic Lateral Sclerosis. Additionally, their work continues to show the versatility of their gFET by employing gFET electronics to monitor other molecular markers of disease, including age-associated changes in the mouse proteome and human exosomes. Beyond novel multiomic electronic analysis platforms, merging biology and nanoelectronics allows them to monitor biomolecules' activity directly and in real-time. Unlike most biological analysis tools, nanoelectronics does not require optical visualization and is therefore not limited by the wavelength of light, which can exceed the diameter of biomolecules of interest and ultimately, detection of those biomolecules. In addition, these nanoelectronic platforms can be used for various types of analytes such as nucleic acids, proteins, exosomes, and cells, as it does not require optical labels. The sensitivity, multiplexing capability, and scalability of nanoelectronics will enable the ability to monitor these analytes simultaneously from the same matrix, while seamlessly generating streams of data that can be analyzed using machine learning algorithms, ultimately allowing a better understanding of system biology. Read more about the Aran Lab's work here.

Join us for the live event on Zoom. All participants and hosts are required to sign into a Zoom account prior to joining meetings. 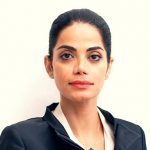 Kiana Aran — Kiana Aran is an Associate Professor of Medical Diagnostics and Therapeutics at Keck Graduate Institute, a member of the Claremont Colleges, a visiting Assistant Professor at the University of California Berkeley, and co-founder and Chief Scientific Officer at Cardea Bio. Aran also serves as a Consultant of Drug Delivery and Medical Diagnostics for the Bill & Melinda Gates Foundation. She received her undergraduate degree in electrical engineering from the City University of New York in 2007 and her Ph.D. in Biomedical Engineering at Rutgers University in 2012. She then continued her postdoctoral studies in bioengineering at the University of California, Berkeley, and was a recipient of the National Institutes of Health (NIH) postdoctoral training fellowship at the Buck Institute for Aging Research in 2015. Her efforts have been recently recognized by many awards in science and STEM including the Clinical OMICs 10 under 40 Award and the Athena Pinnacle Award. Aran was also the recipient of the NSF Career Award to develop the next generation of electronic sensors.