This seminar, led by David Johnston-Monje at the Universidad del Valle in Cali, Colombia, will discuss bioprospecting for beneficial bacteria within plant microbiomes. This effort offers much potential to develop inoculants for sustainably improving plant productivity, mitigating stress, and controlling diseases. He will discuss his research on seeds as a rich source of endophytes, especially belonging to the genus Pantoea, Enterobacter, and Burkholderia, and how some of these have the ability to systemically move through adult plants, exit through the roots, and colonize the rhizosphere. Some examples of these beneficial seed bacteria are the strongly plant growth-promoting Burkholderia phytofirmans isolated from seeds from a giant Mexican landrace, root growth-enhancing Enterobacter asburiae isolated from seeds of a wild variety of Nicaraguan swamp grass, and the fungal biocontrol strain Burkholderia gladioli isolated from seeds of a Mexican dessert popcorn.

He will then discuss how his team found that seeds are more important than soil in the formation of young maize endospheres, and likewise, the rhizospheres of young maize plants are dominated by seed transmitted Proteobacteria, primarily Burkholderia and Enterobacter. Expanding the study to include 16 other species of angiosperm plant including Arabidopsis, Brachypodium, wheat, tomato, rice, and coffee, he will cover how his team found evidence that the seeds, spermospheres, shoots, roots, and rhizospheres of angiosperms are all dominated by taxonomically similar strains of Pantoea, Enterobacter, and Pseudomonas. Shared by dicots and monocots alike, this core microbiome perhaps hints at an important and ancient relationship between seed transmitted Proteobaceria and angiosperm plants. Patents related to these discoveries helped launch the company Indigo Agriculture, which is the best-funded agriculture startup in world history. Read more about his research here.

Join us for the live event on Zoom. All participants and hosts are required to sign into a Zoom account prior to joining meetings. 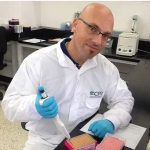 David Johnston-Monje — David Johnston-Monje began his profession at the University of Ottawa focused on the chemical ecology of medicinal plants, moved on to a M.Sc. in wood genetics at the University of British Columbia, and finished a Ph.D. from the University of Guelph in the microbial ecology of maize. He has been a visiting researcher at Biodiversity International in Italy (education policy), the International Potato Research Institute in Peru (nutrient genetics of potatoes), EMBRAPA Agrobiology in Brazil (microbial ecology of maize), and most recently at the International Center for Tropical Agriculture in Colombia (dynamics of plant microbiomes). Johnston-Monje conducted his post-doctoral research with George Lazarovits at A&L Biologicals, focusing on discovering what causes the emerging disease tomato vine decline. He is currently at the Universidad del Valle in Cali, Colombia studying plant microbial ecology.