IGI Executive Director Jennifer Doudna and Emmanuelle Charpentier have received the prestigious Japan Prize to recognize their groundbreaking contributions to the field of CRISPR genome engineering. In 2012, the collaborators discovered that the bacterial Cas9 protein can be easily programmed to cut DNA at any location, enabling researchers across the globe to use this tool as a revolutionary method for genome editing. Weizmann Institute professor Adi Shamir was also honored with the prize for his breakthrough cryptography research. The award was presented at a formal ceremony on April 19th in Tokyo. The emperor and empress of Japan attended the event, which had over 1000 people in the audience. 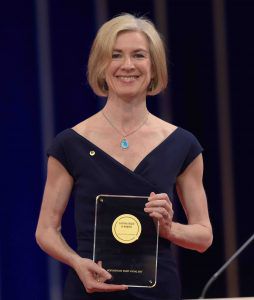 The Japan Prize organizers also did a fascinating Q&A with the honorees, which covers applications of genome editing, CRISPR basics, what it’s like to be a scientist, and more. Watch the whole playlist below: