The building was ready. Balloons stamped with the Institute’s logo filled the lobby. Freshly printed T-shirts were laid out next to blank name tags, prepped for the incoming crowd. At 2 pm on October 27th, 2017, the doors of the Energy Biosciences Building opened for the inaugural Innovative Genomics Institute Open House.

Over 300 attendees from the Berkeley campus and wider Bay Area community attended the event. Graduate students and professors, lawyers and artists, from down the street and across the country, there was no shortage of diversity amongst the crowd. The IGI Open House was designed to provide an overview of the Institute’s research projects and overall mission, while also fostering community among scientists to propel future collaborations.

After an hour of mingling, the Executive Director of the IGI, Jennifer Doudna, began her opening remarks. Speaking in front of a packed room and a camera that streamed the talks online and to screens in the lobby and outside the building, Jennifer outlined the history and formation of IGI, as well as the five research program areas: biomedicine, technology, microbiology, agriculture, and society.

Following Jennifer’s opening remarks, the scientific director of biomedicine, Jacob Corn, talked about the IGI’s transition from an initiative to an institute. Jacob played a fundamental role in mapping out IGI’s goals to develop novel gene editing approaches and translate this work towards human therapeutic applications. Jacob concluded his talk by outlining the current biomedical projects. He gave a great overview of how the IGI fits into the UC Berkeley campus community and the wider Bay Area, sharing cell lines and libraries, supporting facilities and infrastructure, and more.

Next up to the microphone was Brian Staskawicz, the scientific director of agriculture, the fastest growing branch of the IGI. Brian provided an overview of the twelve new grant recipients and their projects, many of whom are based at UC Davis. Through the inter-campus collaborations between Berkeley and Davis, the IGI aims to develop novel methods to improve plant editing efficiency, and subsequently use these cutting-edge technologies to develop sustainable agriculture.

Jill Banfield, scientific director of microbiology, took the podium next. Jill opened by highlighting recent data from her lab that uncovered new and exciting microscopic organisms. The Banfield lab mines exotic locations for unique microbes that help expand our understanding of evolution and reveal previously unidentified proteins. The IGI’s three new microbial projects follow similar explorative and creative goals. Two of these efforts seek to understand and alter the microbiome, a community of symbiotic microbial species, while the third will tackle a debilitating agricultural toxin that is contaminating essential food sources.

Rounding out the research overview, IGI managing director Susan Jenkins outlined the three new social science projects. Since its formation, the IGI has not only strived to advance novel technologies but also endeavored to understand the societal impact of these innovations. Recent grant recipients in the social sciences will explore the regulation of gene editing therapies, measure public engagement with the advancing technology, and understand the economic and environmental impacts of editing technologies in agriculture. Susan concluded her talk by highlighting the IGI’s Entrepreneurial Fellows Program, which is currently supporting two scientists to take their innovative ideas into the private sector, and the IGI’s first Shurl & Kay Curci Foundation faculty scholar, Roberto Zoncu.

The presentation portion of the Open House concluded with Megan Hochstrasser, manager of science communications. Megan provided a captivating overview of the institute’s current and future education and outreach projects. The Ask a Scientist program has connected students from across the country and the world with local CRISPR scientists to answer any biology, technology, and societal questions. Megan also highlighted an ongoing collaboration between the IGI and both Addgene and the Lawrence Hall of Science to create an educational CRISPR kit. Megan concluded her talk by explaining how new IGI members could get involved in education and outreach, an important component of IGI’s mission.

Watch the full talks below:

Following the talks, attendees congregated around newly-installed art piece in the EBB lobby. Artist Ellen Sandor, founder and director of (art)n, donated a mesmerizing piece detailing the mechanism of CRISPR-Cas9 genome editing. Standing in front of a glowing, 3D Cas9, Shannon Jackson, Associate Vice Chancellor of Art and Design, introduced Ellen and described the importance of integrating art and science as a form of expression and communication. Ellen’s energy was contagious as she concluded her brief speech with motivating remarks for the young scientists in the room to continue pushing the boundaries of knowledge and technology.

Funneling back into the main seminar room, participants stood by their posters, ready for the final event of the day. Over 30 posters filled the room, representing all program areas. IGI Entrepreneurial Fellow Alex Schultink brought out a fluorescent plant to help explain his novel ideas for improving crops. Young scientists explored potential labs to join, while seasoned researchers shared insight and discussed potential collaborations.

At 5:30 pm, the doors of the IGI Open House closed. This will surely be the first of many big events as the IGI continues to grow.

Scroll through Open House photos below:

All photos were taken and edited by Peg Skorpinksi. 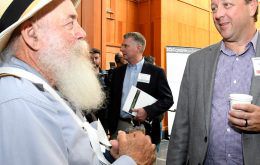 Diverse Opinions on Stage at CRISPRcon 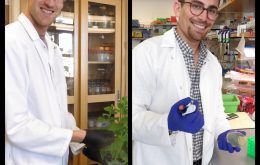 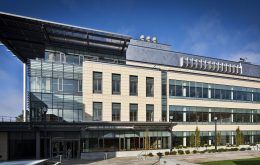 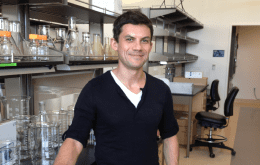