Hibernation is a remarkable feat. Animals dramatically lower their body temperature, metabolism, and blood flow, allowing them to survive harsh winter conditions. Arctic ground squirrels take this to the extreme. Native to Alaska, Siberia, and Northern Canada, the body temperature of Arctic ground squirrels drops below freezing while they hibernate, reducing blood flow to the brain by more than 90 percent.

“My lab is interested in understanding the basic mechanisms underlying the actions of genes and pathways that protect cells in conditions like stroke and heart attack, where cells with high energy needs, like neurons and heart cells, are often damaged or die because they are cut off from oxygen,” says IGI member Dengke Ma, an Assistant Professor in the Department of Physiology and the Cardiovascular Research Institute at the University of California, San Francisco, whose paper was published today in the journal eLife.

Ma and his research team have been investigating the unique biology of Arctic ground squirrels with funding from the IGI’s Shurl & Kay Curci Foundation Faculty Scholars Program, a program that supports early-career faculty with bold ideas that use CRISPR to advance human health.

We humans may pride ourselves on our smarts, but the brains of Arctic ground squirrels have some key advantages.

“Human brain cells are sensitive and can only go without oxygen for a couple minutes,” explains first author Neel Singhal. “Arctic ground squirrels can have oxygen to the brain cut off for six minutes and the cells are just fine.”

What makes a super cell? 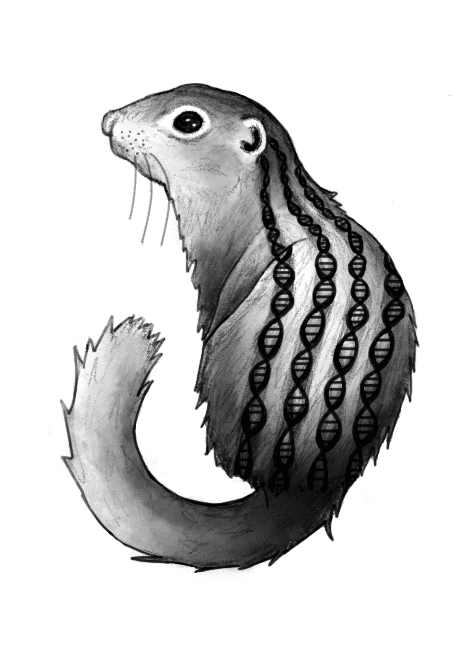 Ma’s group focused on studying Arctic ground squirrel neuronal precursor cells (NPCs), which are similar to neurons but easier to grow in a laboratory setting. Ma and his team found that these NPCs could stay healthy even when faced with low oxygen, low nutrients, cold temperatures, and harsh chemical stressors. NPCs from mice, which do not hibernate, showed damage under the same conditions.

To figure out which genes give the squirrels their remarkable resilience, Ma and his team made a library of genes from Arctic ground squirrels and inserted each one into mouse NPCs. Then, they subjected the mouse NPCs to intense stress — only the mouse NPCs that got the protective genes would be able to survive the stress.

Secrets of the mitochondria

In a converse experiment, Ma used DNA base editing — a new variant of CRISPR-Cas gene editing — to change the unique parts of the gene in the Arctic ground squirrel cells. When they edited ATP5G1 to more closely resemble the version other rodents have, the cells lost stress resistance. Together, these tests confirm that this unique version of a mitochondrial protein is critical to the Arctic ground squirrel’s remarkable hibernation abilities.

Ma is now working on putting the Arctic ground squirrel gene variant into mouse models of stroke and heart attack to see if they protect the animals from damage. If this is successful, he hopes to create a gene-editing therapy that could be given to patients after heart attack or stroke, so they are protected against recurrent attacks.