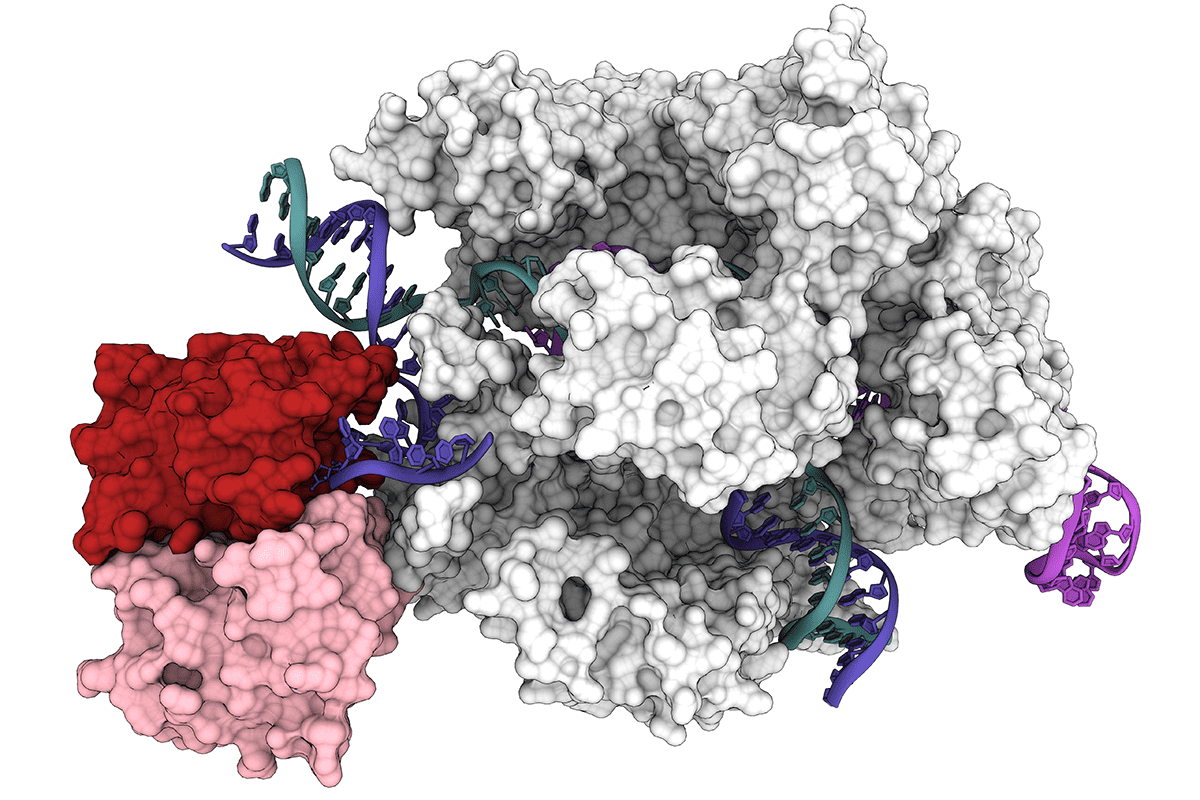 Within a mere eight years, CRISPR-Cas9 has become the go-to genome editor for both basic research and gene therapy. But CRISPR-Cas9 also has spawned other potentially powerful DNA manipulation tools that could help fix genetic mutations responsible for hereditary diseases.

Scientists at the University of California, Berkeley, have now obtained the first 3D structure of one of the most promising of these tools: base editors, which bind to DNA and, instead of cutting, precisely replace one nucleotide with another.

First created four years ago, base editors are already being used in attempts to correct single-nucleotide mutations in the human genome. Base editors now available could address about 60% of all known genetic diseases — potentially more than 15,000 inherited disorders — caused by a mutation in only one nucleotide.

The detailed 3D structure, reported in the July 31 issue of the journal Science, provides a roadmap for tweaking base editors to make them more versatile and controllable for use in patients.

“We were able to observe for the first time a base editor in action,” said UC Berkeley postdoctoral fellow Gavin Knott. “Now we can understand not only when it works and when it doesn’t, but also design the next generation of base editors to make them even better and more clinically appropriate.”

A base editor is a type of Cas9 fusion protein that employs a partially deactivated Cas9 — its snipping shears are disabled so that it cuts only one strand of DNA — and an enzyme that, for example, activates or silences a gene, or modifies adjacent areas of DNA. Because the new study reports the first structure of a Cas9 fusion protein, it could help guide the invention of myriad other Cas9-based genome-editing tools.

“We actually see for the first time that base editors behave as two independent modules: You have the Cas9 module that gives you specificity, and then you have a catalytic module that provides you with the activity,” said Audrone Lapinaite, a former UC Berkeley postdoctoral fellow who is now an assistant professor at Arizona State University in Tempe. “The structures we got of this base editor bound to its target really give us a way to think about Cas9 fusion proteins, in general, giving us ideas which region of Cas9 is more beneficial for fusing other proteins.“

Lapinaite and Knott, who recently accepted a position as a research fellow at Monash University in Australia, are co-first authors of the paper.

“This structure helps us understand base editors at a much deeper level,” said senior author Jennifer Doudna, UC Berkeley Professor of Molecular and Cell Biology and Founder and Board Chair of the Innovative Genomics Institute. “Now that we can see what we’re working with, we can develop informed strategies to improve the system.”

Editing one base at a time

In 2012, researchers first showed how to reengineer a bacterial enzyme, Cas9, and turn it into a genome-editing tool in all types of cells, from bacterial to human. The brainchild of Doudna and her French colleague, Emmanuelle Charpentier, CRISPR-Cas9 has transformed biological research and brought gene therapy into the clinic for the first time in decades.

Scientists quickly co-opted Cas9 to produce a slew of other tools. Basically a mash-up of protein and RNA, Cas9 precisely targets a specific stretch of DNA and then precisely snips it, like a pair of scissors. The scissors function can be broken, however, allowing Cas9 to target and bind DNA without cutting. In this way, Cas9 can ferry different enzymes to targeted regions of DNA, allowing the enzymes to manipulate genes.

In 2016, David Liu of Harvard University and the Broad Institute of the Massachusetts Institute of Technology and Harvard combined a Cas9 with another bacterial protein to allow the surgically precise replacement of one nucleotide with another: the first base editor.

While the early adenine base editor was slow, the newest version, called ABE8e, is blindingly fast: It completes nearly 100% of intended base edits in 15 minutes. Yet, ABE8e may be more prone to edit unintended pieces of DNA in a test tube, potentially creating what are known as off-target effects.

The newly revealed structure was obtained with a high-powered imaging technique called cryo-electron microscopy (cryoEM). Activity assays showed why ABE8e is prone to create more off-target edits: The deaminase protein fused to Cas9 is always active. As Cas9 hops around the nucleus, it binds and releases hundreds or thousands of DNA segments before it finds its intended target. The attached deaminase, like a loose cannon, doesn’t wait for a perfect match and often edits a base before Cas9 comes to rest on its final target.

Knowing how the effector domain and Cas9 are linked can lead to a redesign that makes the enzyme active only when Cas9 has found its target.

“If you really want to design truly specific fusion protein, you have to find a way to make the catalytic domain more a part of Cas9, so that it would sense when Cas9 is on the correct target and only then get activated, instead of being active all the time,” Lapinaite said.

The structure of ABE8e also pinpoints two specific changes in the deaminase protein that make it work faster than the early version of the base editor, ABE7.10. Those two point mutations allow the protein to grip the DNA tighter and more efficiently replace A with G.

“As a structural biologist, I really want to look at a molecule and think about ways to rationally improve it. This structure and accompanying biochemistry really give us that power,” Knott added. “We can now make rational predications for how this system will behave in a cell, because we can see it and predict how it’s going to break or predict ways to make it better.”

“While base editors are now widely used to introduce precise changes in organisms ranging from bacteria to plants to primates, no one has previously observed the three-dimensional molecular structure of a base editor,” said Liu, who is also a Howard Hughes Medical Institute investigator. “This collaborative project reveals the beautiful molecular structure of a state-of-the-art, highly active base editor — ABE8e — caught in the act of engaging a target DNA site.”

In addition to Lapinaite, Knott, Doudna, and Liu, other paper co-authors are Cody Palumbo and Peter Beal of UC Davis, Enrique Lin Shiao of UC Berkeley & the IGI, and Michelle Richter and Kevin Zhao of the Broad Institute, a collaboration between Harvard and the Massachusetts Institute of Technology.