Dr. Blake Wiedenheft is an Associate Professor in the Department of Microbiology and Immunology at Montana State University. I interviewed Dr. Wiedenheft when he spoke at the IGI on April 30th, 2019. An abridged version of our conversation appears below. 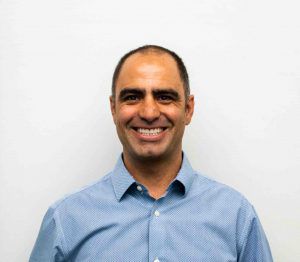 BW: “I wanted to be a cowboy as a kid. I really became passionate about science when I got an opportunity to work in the lab as an undergraduate. The professors I was working for thought we should stop thinking about viruses as infectious agents and start thinking about them as constrained reaction vessels for material synthesis—cooking pots. That experience alerted me to this aspect of science that I hadn’t really considered before: science is all about creativity, it’s an intellectual adventure. From that point on, I was bound to be a scientist. I did my PhD work traipsing around Yellowstone National Park, looking for viruses in the boiling acid hot springs there. Then I ultimately started to wonder how the microbes are responding to those viral infections, and that’s what led me to the CRISPR work I’m doing now. In Jennifer Doudna’s lab, as a postdoc, I had a front row seat to the emerging field of CRISPR biology.”

BW: “My scientific mentors have been inspirational, and have really been my role models. Both undergraduate, graduate, and postdoc. All have very different styles and personalities, but I try to emulate them to the best I’m able.”

BW: “My interest in biology started with phage discovery, virus discovery, and particularly viruses that thrive in these bizarre habitats. I became interested in how bacteria were fighting off those pervasive viral predators. If the viruses put a selective pressure on the bacteria or microbe, and the microbe responds by inventing and evolving an immune system, then the scales tip again. The virus has to figure out how to overcome that immune response. It’s that perpetual arms race that drew me in.”

BW: “We hope to understand the molecular mechanisms of adaptive immune systems in microbes. We think that studying those immune systems through the lens of the virus itself is the most efficient way to understand the mechanism. Viruses or the proteins that these viruses make have to be very deft biochemists, or mechanics of the CRISPR system. If their job is to disarm the CRISPR system, then those proteins have to have evolved very specifically to do that job. So if you understand how anti-CRISPR systems disarm the CRISPR system, then you’re kind of taking advantage of a few millennia of evolution that have been at work to fine tune those proteins. If you can leverage that, then the virus is directing you to the heart of the machine.”

MC: What applications does your research have in terms of biotech and medicine?

BW: “That’s not necessarily the motivation of the work, but potential byproducts of the work include applications in genome engineering and phage therapy. Back in the 1800s when bacteria were first discovered, people proposed that viruses could be used to treat bacterial infections. That’s an approach that fell out of favor around the time of antibiotics. Now that there is so much antimicrobial resistance—it’s expected that by the year 2050 more people will die from multi-drug resistant microbes than cancer—this old technology, [phage therapy], may have new traction.” 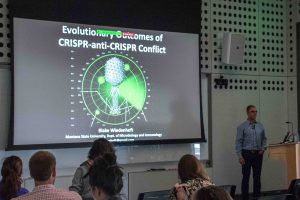 BW: “That’s a really hard question. The field has been evolving so rapidly. When I left the Doudna lab in 2012, the first human genomes had been edited in tissue culture. Late last year, the first humans were engineered using CRISPR. So in a seven-year time frame, just about every multicellular organism that you can think of has been engineered. I think it’s a good time to have historians weigh in on this, with the benefit of the historical precedence of the evolution of some other transformative technology. What does this field look like ten years from now, 100 years from now? What do we do in the next ten years that sets the stage for that 100-year timeframe?

It’s also a hard question in that genome engineering is one widespread application of these tools that came from bacteria for fighting off viruses, and now they’ve been repurposed in ways that nature never intended. Our understanding will continue to expand beyond just CRISPRs because this constant arms race will continue to spur innovation. In ten years, I think people will maybe not be talking so much about CRISPR, but about a newly discovered system.”

MC: What outreach does your lab do to engage the public with your research?

BW: “We do quite a bit of outreach. In Montana, we do our best to try to be as inclusive as possible to minority populations, specifically Native Americans. In the summers we host the ‘Montana Wild Virus Hunt.’ I think it’s a really good way to get Native American high schoolers involved in science. We go to a wastewater treatment plant, which I think is a fascinating place. These places are taken for granted by most people. The [wastewater plant] in Bozeman is treating upwards of ten million gallons of wastewater a day, and they use zero chemicals. They use a combination of different microbial treatments to sequester phosphorous, nitrogen, and also UV banks to crosslink the DNA of anything that may still be alive. It’s such an incredible collision of engineering and the real world application of microbiology. The outreach really revolves around introducing students to this otherwise banal, overlooked infrastructure. We take the samples back to campus and show them how we discover virus particles, just using standard microbiological methods. We also take them to the electron microscope. I also give a lot of public lectures.”

BW: “Part of the reason that I moved back to Bozeman is to take advantage of the outdoors. I find that I’m more inspired when I’m around mountains. Running, skiing, those activities are important to me. I grew up in the town of Fort Peck, Montana. There was an algorithm written by scientists at Oxford to mathematically define where the middle of nowhere is. In the United States the three locations that they identified as the middle of nowhere were right around my hometown. I think my hometown [itself] was not considered the middle of nowhere because you have to be somewhere to be nowhere.”

BW: “Leigh Van Valen and Charles Darwin. I like the way they think. Van Valen was an incredibly creative thinker, he studied so many different topics.”

MC: What advice would you give to young scientists? 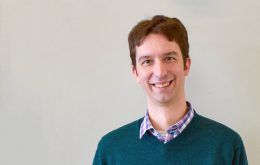 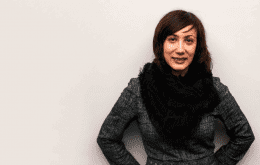 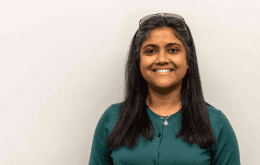 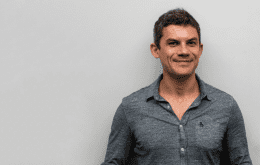